*This post contains affiliate links. As an Amazon Associate, I earn from qualifying purchases. Read my Affiliate Links Disclaimer.

It’s no secret I like fancy things, and even though I am a wildlife biologist, I have actually little experience camping. When I was little, my family would “camp” overnight at Alleghany State Park in hotels and my friend even bought me a make-up bag with “I love not camping” written on it for my birthday. Therefore, I was a little nervous about partaking on a research expedition on Mount Kenya.

I was actually supposed to hike the mountain with friends in 2005 when I lived in Kenya, but Giardia (and its symptoms of vomiting and high fevers) kept me from going. I took this as a sign at the time that I wasn’t meant to climb the mountain, and that it would have been too challenging for me. But 10 years later, when I was approached to run camera traps for a large research expedition on Mount Kenya, although the memories of Giardia still haunted me, it was an opportunity too good to turn down. I was helping to recreate a mammal survey run by President Teddy Roosevelt almost 100 years ago with the Smithsonian’s National Museum of Natural History. We would be running camera traps to snap photos of wildlife and see what has changed over time. I went and made it out alive, but it was probably the most physically challenging experience of my life.

I knew hiking Mount Kenya was going to be hard. I exercise on a regular basis, but I have never hiked a mountain or been at high altitudes. We were hiking the Burguret Route, which is not often frequented by tourists. The trek starts with a car ride up from Nanyuki through shambas (farms) into bamboo forests. Even from the drive up to the park entrance, I could feel a temperature change. People often associate Kenya with hot savannas, and even though this mountain is on the equator (we crossed the line on the way to the mountain), we were not going to be warm.

The bamboo forest is beautiful and my favorite mountain habitat. Setting up camera traps was really fun here; game trails were like mazes in thick bamboo and you never knew where they ended up. Some areas were so dense, you could not see even a few feet in front of you. This brought back some scary memories of being charged by elephants in Gabon, but luckily we only saw old dung. An added bonus of the bamboo forest is that a chorus of tree hyraxes would sing you to sleep every night. Although, cute, their vocalizations are a cacophony of “barks, shrieks, and choking screams” (description in Kingdon’s Field Guide to African Mammals).

This portion of the trail is actually a road, and when not raining heavily, is drivable. The bamboo is constantly encroaching, and hitting your car as you drive through. The road is very bumpy and you have to go slow; in some areas, it is faster to walk. The last point of the road is “Giant Bamboo,” cleverly named for the bigger bamboo. As you move up the mountain, the bamboo forests become less dense, with thicker and taller individual stalks creating a mystical, almost storybook-type world.

Quite often when hiking the mountain, I felt like Tyrion trekking to the Wall in Game of Thrones (I would also say Frodo in The Lord of the Rings, but his end destination was hot, ours was cold). You start off in one landscape, and then transition to vastly different ones. The biggest differences start from the middle of the route, where the large bamboo forest starts to fade. After only one day of hiking, our nights were already much colder and required gloves, hats, and cold-weather sleeping bags.

From here, the hiking was much more difficult too. We frequently encountered steep portions of the trail, and by now we were at about 3,500 m (about 11,500 ft) and could feel the effects of altitude. The further I went up, the more easily I became out of breath. The bamboo had transitioned to meadows and we got to see our first open views. Here we could finally start to process how high up we were, and the progress we made as we scouted Nanyuki in the distance.

Our next check-point on Mount Kenya was Highland Castle (yay! castle!), but is really an open cave (aw, still cool, but not fancy). As we proceeded on our journey, we transitioned into moorlands, dominated by leafless winding trees and thick grasses, like a stunted Sleepy Hollow film. Around noon, it started to rain. At first, I was fine; I had spiffy new rain pants, a Gore-Tex jacket, and gators (my new favorite field fashion accessory) and we kept moving. It rained for about two hours, and then it started to pour. It was also starting to get cold now. When I was moving, it was fine, but any time I stopped, I would feel the chill.

As it continued to pour, my waterproof boots eventually gave way, and the rain was also seeping in my coat sleeves. Then it started to hail. At this point, there really was no trail anymore. We walked through drainages, rocks, and marshes in the general direction of the porters. The hail made it increasingly difficult to see, and therefore know where to step. At moments I wanted to stop and cry, but I took a breath, picked myself up by my bootstraps (or gator straps) and kept going. Luckily, at this point, we were close to the cave. Although I dreaded the final ascent, reaching Highland Castle was one of the most satisfying moments of my life. It was dry and warm; the porters had built a fire, and once I removed my wet layers and changed my socks, I was not only dry, but given the warmest, most fulfilling lunch.

It rained for almost the rest of that afternoon, only breaking right before sunset. We all napped because we were cold and wet and some of us suffered headaches from the altitude. The cave had dried grass on the bottom making it soft and was well-protected, so we didn’t need to set up any tents. It was also crowded with about 15 people, so we laid out our sleeping pads in rows and cocooned in our sleeping bags. My boots were drying by the fire and before the porters went to sleep, they moved them inside so the hyenas would not take them.

The next day, we were on our way to the highest campsite. My boots were still wet, so I made some plastic bag “socks” to wear over my real socks to keep my feet dry. The hike became rockier, we started to see Lobelia and Dendrosenecio plants, which grew in number and size as we kept going up. The rain puddles transitioned to ice puddles and we could see hail collected in the leaves. It was cold, but constantly moving uphill and with a pack, kept me warm. The altitude was really kicking my butt now and I had to stop more frequently and longer to catch my breath. I made it to a foggy upper camp and started setting up my tent.

Lunch was made for us, but I wanted first to make sure all of my stuff was set up (a good decision). Shortly after, I grabbed a sandwich, and it started to hail (there seemed to be a pattern here). I finished my sandwich inside my tent and then snuggled up in my sleeping bag. Even though it was (really) cold up there, I always was warm in my sleeping bag (although I did have on two fleece running tights (I love these), rain pants, wool socks, a poofy jacket, a fleece, a fleece hat, and fleece gloves on and the opening of my mummy sleeping bag was usually open just enough for breathing – I am not a good Buffalonian!). I did have a headache, and I didn’t pack my book because my pack was too heavy, so I fell asleep. In between naps and dinner, we had some chai (super sugary tea with milk) and socialized. After dinner, we were all so cold, we immediately went to sleep (only 7:30!).

Although we made it to the highest camp on Mount Kenya, there was still camera trap work to do. The following day, we set up traps to as far up as we could hike (the very top of the mountain requires technical climbing gear). It was nice and sunny in the morning, which made camp life much warmer, but we had hiking to do and could not linger. As we hiked up, the vegetation became more sparse, and even the Lobelia petered out. Eventually mostly clumps of grass and rocks were left. The walking was overall easier, but in parts, we walked through super sticky mud which clumped to our boots and made our boots heavy. The peak was so close in sight, but we still had more walking.

We eventually reached our near final destination, the tarns, clear blue glacial lakes close to the peak. The peak that we had been staring at for so long, was now just right in front of us. We were near our end with only a few camera traps left to set up around the lake. I realized just how quiet it was at the top; I could hear no insects, birds, or wind, just dead silence. I really couldn’t believe that I had made it.

Although I stayed on Mount Kenya for nearly six weeks, that was my only hike to the top. Most of my research was conducted at the base camp in the bamboo forest (more blogs to come). Riding in the car to Nairobi on the way to the airport, I watched Mt. Kenya in the distance. I thought about all of the people and camps from the expedition still running on the mountain so far away, and still could not believe that one time, I was on the top with them.

Check out some of the animals we never saw on the mountain, but caught on camera trap, here.

*This post was originally featured on The Wildlife SNPits. 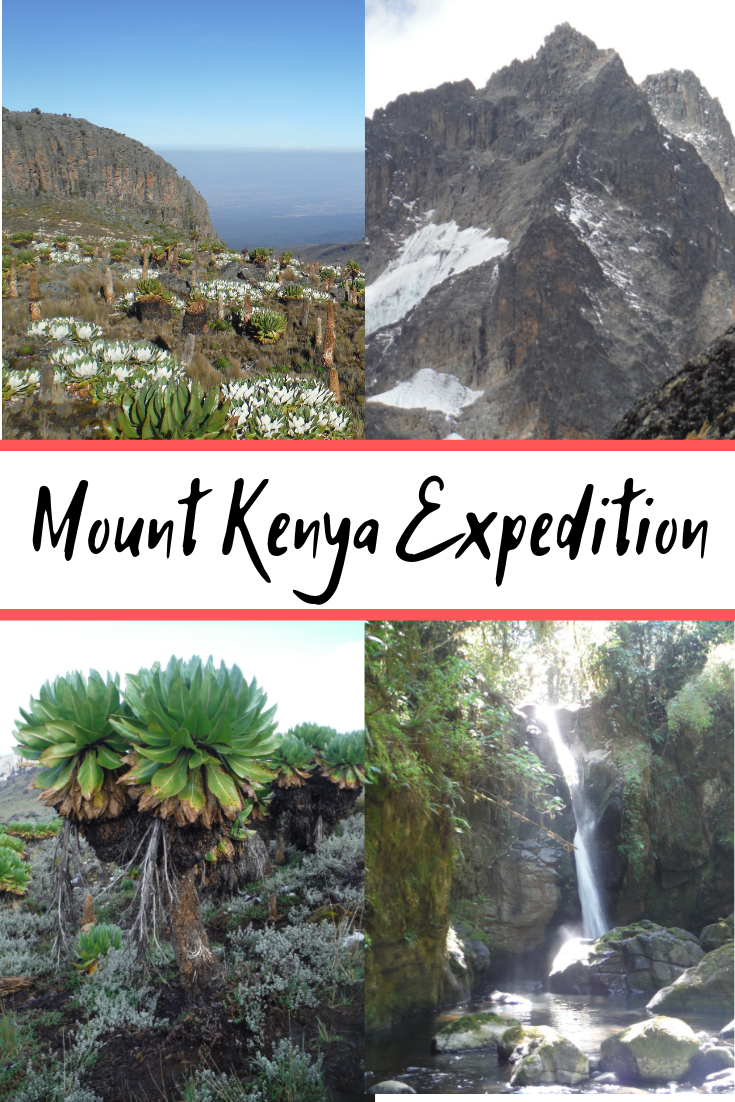 Stephanie Schuttler is a wildlife biologist with 17 years of experience in mammal ecology and conservation, education, and outreach. Read her inspirational story, “My Unexpected Journey Into Science” to find out how she went from the daughter of a jeweler to a Ph.D. in wildlife biology. Feel free to contact Stephanie here.

The Ultimate Organizer
to Discover the Right Wildlife
Job for You

GIVE IT TO ME